From Syria with Love

When Manhal Alkanakri, Abdulhafed Almagri, Ibrahim Alhariri and Rachid Anker fled war-torn Syria in 2016 to start a new life in Canada, they knew it wouldn’t be easy.

They had to learn English. They had to find places to live. And they had to find jobs that would support their large families — all while grieving the profound loss of friends, relatives and the only home they ever knew.

When Manhal Alkanakri, Abdulhafed Almagri, Ibrahim Alhariri and Rachid Anker fled war-torn Syria in 2016 to start a new life in Canada, they knew it wouldn’t be easy.

They had to learn English. They had to find places to live. And they had to find jobs that would support their large families — all while grieving the profound loss of friends, relatives and the only home they ever knew.

“I’m in awe of them,” said Paddy Byrne, president of the International Union of Painters and Allied Trades District Council 38 (DC 38) and director of training for the Finishing Trades Institute of BC (FTI). “Their strength and desire to create a better life for their families is almost unfathomable.”

Byrne feels a certain kinship with the foursome. The son of Irish immigrants, Byrne, his eight brothers and sisters, and their parents immigrated to Canada in 1956, after a false start that included a brief trip back to Ireland at the request of his mother, who desperately missed the Emerald Isle and couldn’t quite see herself as a new Canadian.

The family eventually settled in Burnaby and purchased a modest home, where Byrne’s father, a glazier by trade, created multiple bedrooms in the basement to accommodate his large family. 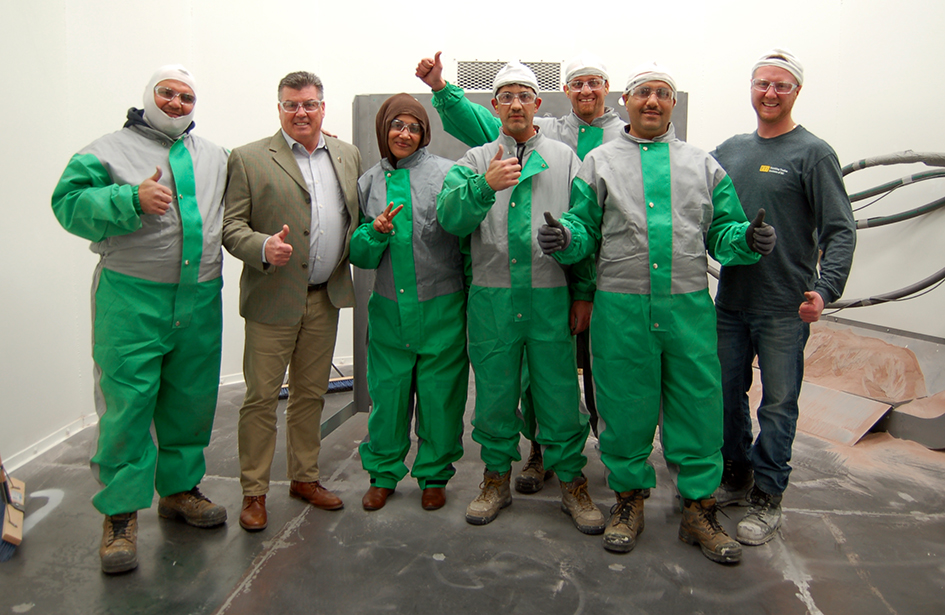 “It doesn’t matter where we’re from,” says Byrne. “When newcomers arrive in Canada, we all desire the same thing: to work and care for our families.”

This special kinship is part of the reason Byrne didn’t hesitate when DC 38 was asked to provide extra training and orientation to Alkanakri, Almagri, Alhariri and Anker at the Finishing Trades Institute.

“It’s simple. As a group, our union helps people. That’s it,” said Byrne.

That sentiment is shared by the BC Alliance for Manufacturing, a coalition of manufacturing industry associations. Its Refugee Training and Employment Program (RTEP) has helped almost 200 refugees gain jobs within B.C. since 2017.

The RTEP program provides participants with core skills expected by employers – English language communication, safety training, work standards, productivity best-practices and other foundational skills necessary for working in an industrial environment. Once RTEP classes are completed, the second portion of the program focuses on industry-specific skills.

In this instance, the BC Alliance arranged for Alkanakri, Almagri, Alhariri and Anker get jobs as Industrial painters with Park Derochie, which helped them register as apprentices.

The four men are now new level one apprentice painter decorators, and while most worked as painters in Syria, they needed a bit of extra support adjusting to the different tools, techniques, materials and safety practices used in Canada. For example, unlike in Canada, respirators for sandblasting are not required in Syria.

“It was inspirational watching them improve so much over such a short period,” said Justin Chapman, the FTI instructor and a Red Seal painter decorator. “I’m proud to have played a role in helping them succeed.”

Chapman said it was fascinating to see his students overcome even the language barrier: “They picked up standard operating hand signals so quickly, and it allowed them to work as a single unit when they were sandblasting.”

Alkanakri, Almagri, Alhariri and Anker expressed their deep gratitude for the support they’ve been given in Canada. In particular, they credited Chapman and Park Derochie Seaside office manager Olena Pazdzierski for helping them adjust to their new lives.

“I just want to make a good life here for my kids,” says Alhariri, who lives in Surrey with his wife and three boys.

A lawyer, Alhariri is the only one among the four who wasn’t working in the trades before he arrived in Canada. Eventually, he hopes to return to law in some capacity, perhaps as a paralegal.

Almagri was a painter in Syria but notes there was no training or safety orientation in his former home. He is grateful to Chapman for “teaching us about our rights.”

Anker agreed, adding that Chapman’s patient teaching style made it much easier to learn.

“He’s a perfect teacher,” said Anker, who supports his wife, their two children, and his mother in Langley.

Alkanakri, too, is supporting his wife and their five school-age children. He lost his parents in the Syrian conflict, and has four siblings still in Syria. He thinks of his family every day.

Soon, the Syrian apprentices will return to the Finishing Trades Institute to receive their forklift certification and begin their Level 1 technical training as part of their apprenticeship. According to Byrne, who calls them the “most enthusiastic group of apprentices I’ve ever seen,” it won’t be long before the sky is the limit.

FTI and the BC Alliance for Manufacturing look forward to working together to help more refugees pursue their careers here in Canada.