WHILE SOME CANADIANS might still be scratching their head at the most recent election, there was some good news in the construction sector: two of the largest parties supported amending the Income Tax Act to finally end unfair treatment of skilled tradespeople who travel for work.

Prime Minister Justin Trudeau called an election on Aug. 15, hoping to secure a majority government and no longer need the support of opposition parties to pass legislation. Ultimately, voters re-elected a minority government with national results that are very similar to the 2019 election. 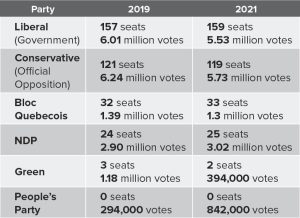 Based on these results, the Liberals will need the support of at least one other substantial party – likely the NDP – to continue to move its priorities forward and to pass legislation.

“Canada’s Building Trades Unions (CBTU) has a good relationship with all parties and will continue to work with them to move forward advocacy priorities such as Just Transition legislation and supports for labour mobility,” said CBTU executive director Sean Strickland.

One of the major successes of the 2021 election for the Building Trades was seeing, for the first time in nearly 20 years, all major parties supporting unions. Both the Liberal and Conservative parties committed in their platforms to introduce a tax credit or deduction to support skilled trades workers who must travel for work.

In the next Parliamentary session, CBTU has outlined advocacy priorities that it will continue to advance with all major parties. These include a Just Transition for energy workers and the implementation of a skilled labour mobility tax deduction.

“Support for workers traveling for work will not only help Building Trades members but will address labour shortages as the country recovers economically from the pandemic,” said Strickland. “Temporary relocation to job sites is a fact of life in the skilled trades. Yet for some reason, the Income Tax Act punishes the very people who must travel to get this country built, while assisting others.”

Construction is cyclical in nature, and at times worker shortages are a reality in parts of the country, with high rates of unemployment in others. In B.C. specifically, there has been an increased use of the Temporary Foreign Worker program to address these shortages – a program which has, at times, been abused by unscrupulous employers, noted Strickland. CBTU and the BC Building Trades will work together with the new government on the abuses of the TFW program and the need to support labour mobility across Canada.

As Canada seeks to achieve net zero by 2050, the federal government will need to make large-scale investments in green technologies and technologies that reduce oil and gas emissions in the traditional oil and gas sectors.

“There are many possible investments we can make on the way to net zero. But there are two things we can’t afford to do,” said Strickland. “We can’t continue to take our skilled tradespeople for granted. And we can’t leave workers behind.”