Seaspan Shipyards’ delivery of its third offshore science vessel to the Canadian Coast Guard in early October dramatically emphasized the rebirth of the West Coast industry. 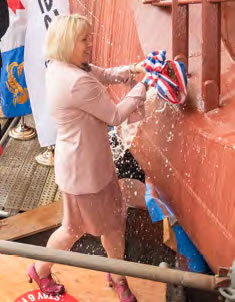 Having Provincial Health Officer Dr. Bonnie Henry break a bottle of champagne on the bow of the CCGS John Cabot at its launch at Seaspan’s North Vancouver shipyard was the crowning touch to celebrate the shipyard’s recovery during the international health and economic crises.

The John Cabot, the CCGS Capt. Jacques Cartier and the CCGS Sir John Franklin had all been built and delivered in 15 months from the rejuvenated shipyard that had sprung back to life, employing 1,200 workers on the coast guard vessels.

IBEW Business Representative Phil Venoit was part of the lobbying effort that saved the West Coast shipbuilding industry when it looked like British Columbia would be shut out of the National Shipbuilding Strategy.

“The shipbuilding industry in B.C, in the early 2000s was on its knees, taking its last breath without a life preserver around them. They were treading water with the understanding that sooner or later they were just going to go under,” Venoit said.

The jobs and training provided by the National Shipbuilding Strategy revitalized the fading industry. And there was more good news in October when the BC NDP announced a long-term B.C. shipbuilding strategy for the province, promising to fight to bring construction of Canada’s next Polar icebreaker to B.C. shipyards, potentially creating up to 1,400 jobs.

“If the work goes away for a generation or two or three, those workers will go with it. And at some point, the specialization will disappear and the shipbuilding will not be able to survive, because they do not have the intellectual capital that goes with those workers,” Venoit said.

“There is still plenty of work to do to ensure that the shipbuilding industry is successful, but meanwhile that federal injection of cash has resulted in jobs for the marine industry and it is continuing to provide good solid apprenticeships and a bright future for those apprentices,” Venoit said.

“It has gone from a shipyard that quite frankly was going to close to a shipyard that won the opportunity to be part of this National Shipbuilding Strategy, to be a preferred provider,” said International Association of Machinists and Aerospace Workers business representative Walter Gerlach. “They were actually considering closing the yard completely.

“The National Shipbuilding Strategy has taken our shipyard from a workplace that was quite cyclical in the nature of its work and has created a much more stable work environment in regards to cycling in and out of the workplace. That is the biggest impact.”

The federal government announced the National Shipbuilding Strategy in 2010, saying it would modernize Canadian shipyards, create jobs and build ships for the Royal Canadian Navy and the Canadian Coast Guard.

Seaspan was selected as the West Coast builder in 2011. Now that the three coast guard science vessels are complete, attention has turned to the first of two larger Joint Support Ships that Seaspan is building for the navy.

The impact on employment was dramatic.

The national shipbuilding strategy produced a training bonanza for maritime trades, and many members of B.C. Building Trades affiliates. A total of 312 apprentices were working at Seaspan’s various shipbuilding sites in and around Vancouver and Victoria in February 2020.

A Deloitte LLP report from February 2020 found the National Shipbuilding Strategy investment in Seaspan from 2012 to 2019 had resulted in:

That investment in modernizing the West Coast Seaspan shipyards caused the National Defence Review to state: “It is now one of the best capitalized and most modern shipyards in North America, with excess capacity and capability to deliver the entire NSS non-combat program of work, and that includes the Polar Icebreaker.”

A spokesman for the federal government said Seaspan Vancouver Shipyards had received more than $4.3 billion in funding — 25 per cent — of all NSS contracts completed by the end of June 2020.

“With this shipbuilding strategy, a lot of folks were able to shift from construction over to the marine side and to have the potential of a really long career doing that type of work.” That resulted in some 232 electricians working at Seaspan during the peak of construction of the three offshore science vessels.

The shipbuilding boom came at a time the union was losing aging skilled members.

“The folks that we did have with experience were getting close to retirement. We were definitely going to lose some of that experience when they did retire and lose the ability to have our apprentices mentored by those folks.”

Although there was a lull after the third science vessel was completed, it was not expected to last long.

And the future looks bright for the next 20 to 30 years.

“Good union jobs, with benefits and pensions. The members working on these projects are going to be set up well for their careers and up to retirement and post-retirement for the amount of pension contributions going in for them,” said Saggu.

United Association of Journeymen and Apprentices of the Plumbing and Pipe Fitting Industry (UA) Local 324 business manager Jim Noon said the National Shipbuilding Strategy had a dramatic impact on his membership since its members put the finishing touches on the first science vessel at the Victoria shipyard.

Local 324 has a lot of members close to retirement age as well, so they are training as many apprentices as possible. Of the 60 members working at the peak, about a third were apprentices.

“It’s important that we get more and more apprentices involved into the trade to make sure that we do not find ourselves in a deficiency upon retirement of our members.”

“Right now, we probably have 10 to 12 apprentices. Some at school, some working, a very good opportunity to learn the trade,” Priestly said. “In the last four-and-a-half to five years, it has ramped up quite a bit, and we are expecting it to grow even more so.”

Prior to the National Shipbuilding Strategy, jobs were scarce.

“Oh goodness, maybe 10 to 15 pipefitters. There were a handful of apprentices. Most of the work was at the dry dock,” said Priestly.

STABILITY AND AN AMAZING CAREER 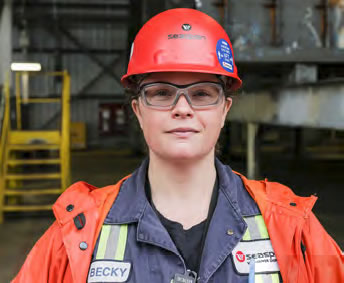 Becky Lupton PHOTO BY BC NDP

Becky Lupton, a journey electrician at Seaspan for four years, says the steady work that came with the National Shipbuilding Strategy allows her to help her family through tough times.

Before hiring on at Seaspan, she worked as an electrician at hydro power substations, water treatment plants and fast food restaurants.

The work was interesting, but when a project ended, she was scrambling to find another job, and that was stressful.

“I had just moved into my condo where I had a mortgage,” she said of one layoff.

Then, with Seaspan expanding its workforce, she was hired on.

“For me, the stability was amazing. It has given me the capacity to move from a condo to a townhouse.”

When a family member needed help, Lupton’s steady job allowed her to help out.

“I could say: ‘Don’t worry about where you are going to stay, you can come and stay with me for a while’.”

And it’s not just the pay, Lupton said: shipbuilding is a fascinating career.

“I think I do want to do this forever. It is a bit of a niche, but it is certainly one that I enjoy.

“The fantastic part about ships is that they are very complex and they are all a little bit different so you are never going to run out of new things to learn about and expand your knowledge.”

“As much as electricity is homogenous regardless of where it is supplied, it functions differently on a ship.”

She said Seaspan is a welcoming environment for women and people of colour.

SEASPAN IS A GREAT PLACE TO GROW

Steamfitter and pipefitter apprentice Adam August had just written his Red Seal exam the day he was interviewed by Tradetalk.

“It felt real good. I did a refresher course, lots of studying and I did not get my usual test anxiety,” August said.

August, a First Nations member of the Sechelt band, was working in residential and industrial plumbing and heating until the work ran out.

“I went in and took a course at BCIT for shipbuilding repair and my instructors were the ones that introduced me to Seaspan. So when I finished the course, I sent in my resume and I got hired. I have been there now for just over five years.”

Married and the father of four, August depends on the steady paycheque, but he’s also fascinated with the shipbuilding industry and wants to move up the ladder to area manager.

“It is amazing. Just from watching the metal coming into the yard, being welded, being formed, being fabricated. Everything from being flat, being pipe, into being built into these boats. Seeing all of that and being part of it is an amazing experience,” August said.

“I would like to grow with Seaspan. I want to get my Red Seal and work my way up.”

August tests the bulkheads to make certain they will stand the rigors needed on an ocean-going vessel.

Overall, he says Seaspan has been a great place to be an apprentice.