On the pathway to hope

EFFORTS BY THE B.C. GOVERNMENT to stop the escalation in opioid overdose deaths seem to be working. This is good news for the construction industry, which has seen its workforce disproportionately affected by the crisis. 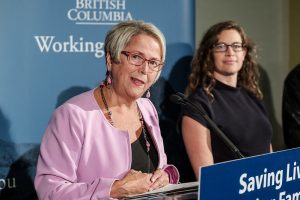 Minister of Mental Health and Addictions Judy Darcy said the government has escalated its response to the crisis and is working on many fronts to reduce and ultimately prevent people from dying.

In June 2019, the government laid out its priorities for improving mental health and addictions care across the province in a 10-year plan titled A Pathway to Hope. Darcy said that prevention is a priority in moving forward. “Prevention is an aspect of care that has been neglected for the past 16 years in this province,” she said. “Our mental health and addictions system was not in a condition to support the regular needs in our province, much less a crisis of this proportion.”

Harm reduction is a major pillar in A Pathway to Hope. It underlies the creation of safe consumption and supervised injection sites, which are proven safe alternatives to using substances alone. It also underlies the distribution of Naloxone, which is used to reverse overdoses and prevent death. The majority of opioid-related deaths occur when people use alone, and having these options is making a difference.

Resources are also being put into treatment and recovery at all levels.

“One of the things I’ve learned both from people living with addiction and from health professionals on the front lines is that it’s not ‘one size fits all’ when it comes to treatment and recovery,” said Darcy. “For some people, it begins with harm reduction. They go to an overdose prevention site or safe consumption site, and there are caring, supportive staff there who can in turn, refer them to treatment. For some it’s abstinence-based recovery. For other people, it’s medically-assisted treatment.”

With the majority of deaths occurring in males between the ages of 19 and 59, the government has partnered with high-profile groups like the BC Lions to reach those most affected by the crisis. The stigma associated with mental health and addiction in this generation is very high, said Darcy. Many in this age group are less inclined to seek help or they think they can take care of themselves, she said.

The government has also partnered with construction organizations, including the BC Building Trades, health, and related organizations to address the higher degree of opioid use in this sector. Construction industry roundtable discussions held in 2018 were described as a “powerful conversation” by Darcy, and have resulted in several points of action for the industry.

The minister acknowledged that it has taken effort from all parts of the community to address the crisis.

“While the government’s investment is significant, it’s important to recognize the efforts of people working on the front lines,” she said. “I am blown away every single day by the courage, the determination, and the dedication of people who are working on this crisis. It’s about all of us. We are making a difference.”

Minister of Mental Health and Addictions Judy Darcy said that there is no magic bullet or single fix to the opioid crisis, and that the approach the B.C. government is taking, seems to be working.

Prevention is considered a cornerstone of the work the B.C. government is doing to address the opioid crisis. The government has opened eight Foundry centres for youth across the province to make it easier for young people to find mental health and addiction supports. Foundry is a provincewide network of integrated health and social service centres that provide a one-stop-shop for young people to access mental health care, substance use services, primary care, social services and youth and family peer supports. There are three more in the works, and eight more to come, said Darcy. “We are beginning to build child and youth mental health teams in schools, too,” she said.

“We have allocated significant money — $10 million — for no cost, or low cost counselling in community agencies. Because very often mental health care and addictions counselling depends on the size of your bank account,” said Darcy, “and we think that’s wrong.”

The provincial government is working with the RCMP and the federal government to crack down on organized crime to  stop fentanyl and carfentanil from being smuggled into B.C. “There are new dedicated anti- trafficking teams,” said Darcy. “We’ve banned illegal pill presses. We’re going after money laundering to try and cut off the dirty money that fuels the crisis,” she said.

There have been over one million visits to overdose prevention sites and safe consumption sites across the province. “There have literally been thousands of overdoses reversed, and not a single death,” said Darcy. “We’ve dramatically increased the availability of Naloxone, which is used to reverse an overdose. Over 185,000 kits have been distributed for free, and roughly 55,000 of those have been used to reverse overdoses. Naloxone kits are available at some 1,700 locations across the province.”

“We’ve introduced tough new regulations to improve the standards of care in private recovery homes,” she said. She described the past situation with many private care facilities as the “wild, wild west” with very little regulation.

There’s now more support for individuals who need medically assisted treatment to withdraw safely from opioids. “When you’re dealing with this dangerous toxic drug supply on the street, which is killing people, it’s critical to have safe prescription alternatives to the toxic drug supply,” said Darcy. More professionals can prescribe these treatments, and more people are able to access medically
assisted treatment, she said.

There are two new, and six renovated and rebuilt Indigenous treatment centres in the province. Darcy said the $40-million-investment is one of the most significant investments the government has made to address the crisis. A trial Therapeutic Recovery community was launched in 2018 on Vancouver Island, with a new treatment facility for youth opening in Chilliwack in 2020. These are longer-term solutions to the opioid crisis in B.C.

On the Pathway to Hope