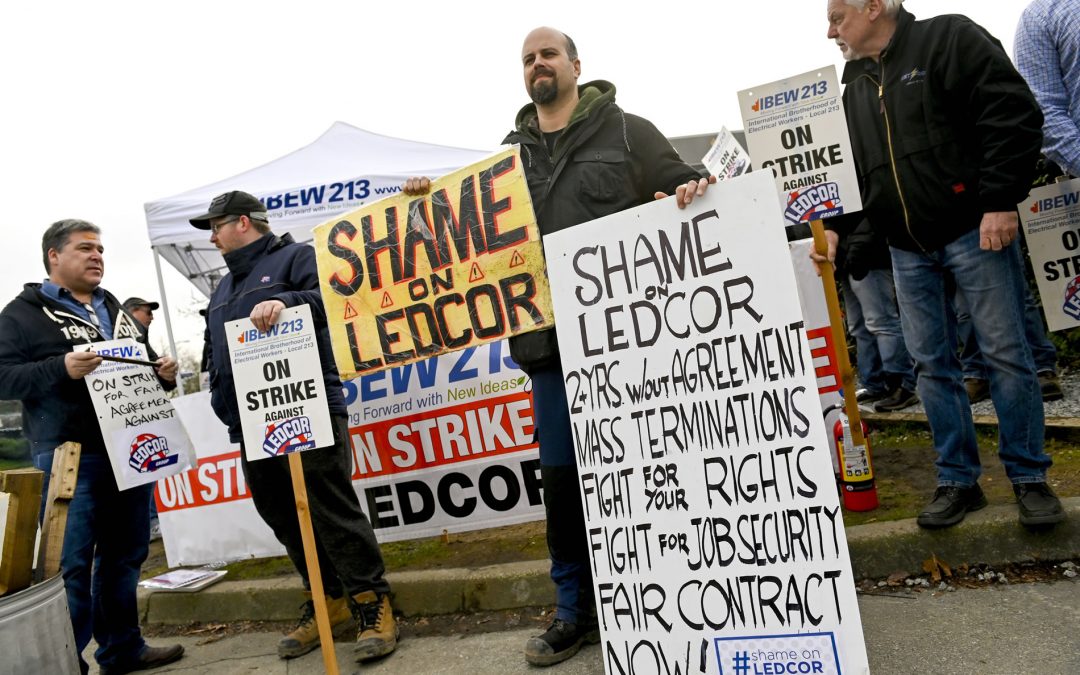 MEMBERS OF LOCAL 213 ON STRIKE AGAINST LEDCOR

FIGHTING FOR A FIRST CONTRACT in a non-union-dominated industry takes determination — especially when federal labour law stacks the deck in favour of anti-union employers.

Striking members of the International Brotherhood of Electrical Workers Local 213 seeking a first contract with Ledcor (LTS Solutions Ltd.) walking the line in freezing temperatures at the company’s Port Coquitlam office, however, showed no signs of giving up the battle, despite a difficult federal labour code. Construction workers will be familiar with Ledcor.

“It’s all worth it,” declared Mik Alfaro, walking the line with his co-workers.

Alfaro and other picketers, who carried signs and huddled around a 45-gallon burning barrel for warmth, spoke about their commitment to getting that critical first contract with Ledcor, which is one of the largest construction companies in the country. (Ledcor Technical Services is the company’s communications arm.)

All the short-term obstacles facing them did not lower Alfaro’s enthusiasm, nor that of other strikers looking for the long-term benefits of a contract.

Local 213 officers know establishing a foothold, first contract for Local 213 members in the telecommunications industry is no easy job, but it is necessary for workers to obtain job security, decent working conditions, decent pay, and a little respect.

“We were told before the drive: ‘Good luck organizing Ledcor, it’s not going to happen,’” said assistant business manager Robin Nedila. But Local 213’s biggest strength is the commitment and determination of the striking members. “These workers want to be part of a real union,” Nedila said.

Workers have endured an uncommonly wet, windy and snowy autumn and winter outside the Ledcor offices since their strike began on Sept. 30. Their battle for a contract began more than two full years earlier on Aug. 31, 2017, when their bargaining unit of 238 technicians was certified. Already low piece-rate wages were cut, workers were fired, and working hours were extended.

Alfaro, 10 years an installation and repair technician, acknowledged the strike is not easy, but said it is worth fighting for a good job, with decent pay and benefits.

“I have three kids, and the youngest is four months old, the oldest is six years old,” Alfaro said as one of many passing motorists honked support for the strikers. “I have a mortgage. I have a house in Cloverdale. It’s not easy at all.”

Alfaro’s financial situation is not made any easier by the need for his wife to take a temporary maternity leave to look after their children.

“It’s nice to fight for change even though many people say unions are not appropriate anymore. In our situation, it makes more sense to fight for the union,” Alfaro said, adding that despite the personal sacrifices the picketers are making, they’re worse off without a union.

“I have been here for 10 years. I have seen friends, I have seen mentors and trainees and they have disappeared en masse,” Alfaro said. “I feel very strong that this is the only hope for the industry.”

Kode Thurairaja has been installing television, Internet and telephone services for Ledcor for six years. He has never before been a union member. Now, he says, it is the only option, the only choice.

Thurairaja has a $4,500-a-month mortgage, three children aged, two, four and eight years, and a wife who has taken time off to raise their family.

Thurairaja says he needs job security, and he needs to support workers who have been improperly fired, because of the fight for a first contract, he said, referring to 31 workers terminated on Sept. 25, shortly after the union achieved a strike mandate.

“People were laid off for no reason,” he said. “I want a union so that when problems come up, the union can support us. We need to have those jobs back.”

Thurairaja worries about his own job as well. He says getting a first contract would give workers the security that comes with seniority and fair layoff rules.

“If the union was in there, then I would not get laid off,” he said.

Thomas Veneracion has worked in Ledcor’s installation and repair division for two years. He and his wife have a new townhouse, and they must start making mortgage payments on it within two years.

Veneracion is fighting for job security.

“I am supporting my brothers and sisters who were terminated unjustly. We had 31 technicians who were fired.”

Veneracion said he was disappointed with Ledcor’s attitude toward its employees during their two-year battle for the benefits of negotiating a union contract.

“I am hoping that Ledcor would finally reach a collective bargaining agreement and not just play around with us, give us hope and prolong the process,” he said. “They are not treating us fairly. They should cut the scare tactics.”

Veneracion said the job security was worsened by Ledcor’s unrealistic demands on workers.

“Some jobs are undoable with the time, the tools and the support they give us. They tell us just to complete it.”

Unrealistic working conditions had led to even more job insecurity.

“There is the threat of termination if we do not do a good job or perform to their standards of work,” Veneracion said.

Abdul El-Najjar has been through lots of “ups and downs” as a technician in the installation and repair division for the past four years.

The rapid staff turnover erodes job security. “You can be disciplined or you can be terminated for ad hoc reasons that the company can come up with.”

In addition to employment insecurity, workers have to deal individually with a company that changes the piece rate pay system and work schedules arbitrarily. “They disguise it under the ‘increase your earning potential.’”

IBEW 213 is calling on the federal labour minister to order the Canadian Industrial Relations Board to impose a first contract.

“Under the Canada Labour Code, there is no threat of binding arbitration like there is in provincial,” said IBEW Local 213 business representative Dustin Brecht. “Unless the minister steps in, they can just go on and on.”

Brecht said ministerial intervention is essential, because Ledcor is not negotiating in good faith. He said that Ledcor has unfairly fired workers in the installation and repair division recognized by the Canada Labour Board as a bargaining unit, and it has hired replacement workers in other divisions to do their work. “They only hired into the (multi-dwelling units) division with inflated wages. They have massive numbers of subcontractors right now.”

Nedila said Ledcor’s firing of workers and bargaining tactics were to be challenged in a Canada Labour Board hearing expected in February, after Tradetalk’s deadline. “The original certification was for 238 members, now it’s down to 115.”

In addition to terminating staff in the installation and repair division, the IBEW says Ledcor is contracting out bargaining unit work, and has laid off another division entirely.

The drive to unionize the Ledcor workers dramatically demonstrates the weakness of the federal labour code, compared with the B.C. provincial code.

“We feel it would make a huge difference, because for one they cannot use replacement workers (under provincial law),” Nedila said.

“And, there is the threat of binding arbitration so the company knows if it does not bargain in good faith, there is an agreement that is going to be forced on them. They have the authority under Section 80 of the Labour Code to impose a two-year agreement,” Nedila said.

Local 213 sent a letter to federal Labour Minister Filomena Tassi “to consider our urgent request” and impose a collective agreement.

Canadian labour law recognizes how difficult first contracts can be, and that intervention is sometimes necessary, especially when hearings about unfair labour practices take so long to be heard, the letter states.

“Some of these new union members believe that (unfair labour practices complaints) will never be heard at the Board, and there won’t ever be a collective agreement. This is Canada; we can do better than this,” says the letter.

“Two years is too long to wait for a first collective agreement.”

The installation and repair division bargaining unit workers have seen their piece rate pay system gutted. Their pay is based on a quota system that has seen wages fall drastically. And unreliable customer satisfaction surveys are being used to determine pay. “Their metrics are unobtainable,” Brecht said.

How customers respond to an automated customer survey can determine their pay. But Brecht said the automated survey does not take into account that the person answering the phone and taking the survey might be a child that answers the home phone.

But changes to customer needs and arbitrary changes by the company can damage employee pay.

“I am not earning as much money as before,” Alfaro said. “Before in a week you would have four good days and one bad day. And you would be fine. Now, most of us have four bad days and one good day so it doesn’t work for us anymore.”

IBEW 213 members employed by Ledcor LTS are on a legal strike, but that hasn’t stopped Ledcor from using scabs to do their work.

The picketers say that many of the non-union replacement workers have not received the same level of training as their picketing counterparts, and their working conditions do not allow them the time to do their work properly.

These conditions have led to reports of damages to Telus customers’ property when poor installations damage hydro, gas or water lines.

So customers asking for Telus to install residential or business telephones, Internet, television, or alarms can insist that the services be provided by unionized Telus employees (United Steelworkers Local 1944). Customers might have to wait a bit longer for their service, but they will have less risk of damage to their homes or businesses, and support striking IBEW Local 213 workers at the same time.

Local 213 is using flying pickets to pressure Ledcor to bargain fairly, so supporters are also asked to text IBEW Local 213 at 604-786-0304 if they see scab workers doing union work.

There is nothing like support from fellow trade unions in a difficult labour dispute.

Local 213’s two-year battle for a first contract with Ledcor has been bolstered by support from other unions.

“We have gotten help from the United Association Local 170. They gave us $7,000. They are our biggest contributors monetarily,” said IBEW Local 213 business manager Jim Lofty.

Other financial contributions have come from the Canadian Union of Public Employees, BC Teachers’ Federation and others. The United Food and Commercial Workers and Community Savings Credit Union sent gift cards at Christmas time.

The International Union of Operating Engineers Local 115 even stopped by with their huge inflatable rat, named Scabby, to draw attention to Ledcor’s use of scab workers.

The United Steelworkers Local 1944 have also been big supporters, Lofty said. Local 1944 published an article on its union website advising its members how they can support strikers: “Ledcor Strike: Do you know who you are allowing into your home or business?”

Some of the biggest morale boosters have been the supporters who came by with food, wood, or propane to fuel, feed and warm picketers on a cold days.

In August 2019, IBEW members from across Canada joined the Local 213 picketers in a show of support.

“The people that do come by, that do show solidarity, that gives them to spirit to keep fighting,” Lofty said. “When somebody shows up they are like: ‘We are not alone.’”