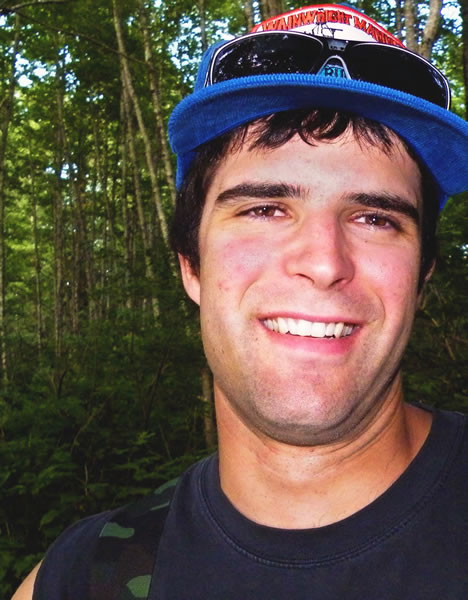 THOSE RESPONSIBLE FOR the death of 24-year-old rock scaler Sam Fitzpatrick should pay with the one thing they took from him: time.

And that could happen – maybe soon. “These charges are unprecedented insofar as they are criminally charging a big company and two of their top dogs,” said BC Building Trades workers advocate Merrill O’Donnell, referring to the upcoming criminal negligence trial in Fitzpatrick’s death.

Fitzpatrick was crushed to death by a falling boulder on a Peter Kiewit Sons worksite in Toba Inlet north of Powell River on Feb. 22, 2009. Now, more than 12 years later and after an intensive campaign by Fitzpatrick’s family and the United Steelworkers Union, Kiewit and two former employees – manager Gerald Karjala and engineer Timothy Rule – will finally face criminal charges.

A trial for the case was initially scheduled to start last month but has been postponed to September 2021.

The charges against Kiewit and its managers are a test of the 2004 Westray Law, which made it possible to attribute criminal liability to corporations and their representatives when workers are injured or killed on the job.

The maximum penalty under the Westray Law is life in prison for an individual, and a fine “at the discretion of the court” for a corporation. O’Donnell is cautiously hopeful: “The final decision will tell us how unprecedented this really is. It could be a wakeup call for our captains of industry.”

Kiewit is one of the biggest construction companies in North America and has a long history of signing collective agreements with the employer-friendly Christian Labour Association of Canada (CLAC).

WorkSafeBC investigated the incident in 2011, finding “reckless and grossly negligent” decision-making by company management who had ordered heavy equipment to operate on the rockface above where Fitzpatrick and his brother Arlen were working. This was is in spite of an incident the previous day in which a huge rock dislodged and barely missed workers below. WorkSafeBC fined Kiewit a “presidential penalty” of $250,000 – the highest penalty imposed that year. But Kiewit successfully appealed to the Workers’ Compensation Appeal Tribunal (WCAT) and had that amount reduced to a “Class A” penalty of less than $100,000 – an “alarmingly pathetic” decision as far as O’Donnell is concerned.

Kiewit’s appeal was supported by CLAC, which submitted to WCAT that “a presidential penalty was not appropriate given the employer’s prior demonstrated commitment to safety.” CLAC’s support for Kiewit is one of the reasons Fitzpatrick’s family turned to the United Steelworkers Union and the BC Federation of Labour for help. USW and the BC Fed supported Fitzpatrick’s family after the tragedy, with both organizations lobbying for the prosecution of negligent employers under the Westray Law. The USW’s Stop the Killing, Enforce the Law campaign and a decade-long crusade for justice by Fitzpatrick’s late father, Brian, kept the tragedy in the spotlight.

“Brian Fitzpatrick came to our union although neither he nor his son were USW members,” said Stephen Hunt, USW Western Canada director. “Brian was relentless to bring justice for his son. He would talk to everyone who would listen. We listened and stepped in to help him in his struggle. I knew we needed to help Brian fight for justice, not only for Sam, but for all workers.”

Before he passed away in the summer of 2017, Brian Fitzpatrick, 74 at the time, spent the previous eight years fighting for justice for his son. He had lobbied for the RCMP to open an investigation in 2014, and had learned just prior to his death that the RCMP recommended criminal charges against Kiewit and its managers.

Sam Fitzpatrick’s death at a Peter Kiewit Sons job site was not a first for the company.

According to a Dec. 1, 2016 story in the Tyee, Kiewit was implicated in seven other B.C. worker deaths at the time, had been repeatedly fined for safety breaches leading to worker death and injury in the U.S., and was accused of shoddy workmanship on two major U.S. public works projects.

The same story quoted a WorkSafeBC inspection report faulting Kiewit for “deficient safety planning and supervision” and “a lack of effective risk management,” leading to the original $250,000 presidential fine.

Excerpted from Hell’s History, the story of USW’s fight to prevent workplace deaths and injuries, by Tom Sandborn:

“According to a WorkSafeBC inspection report, the Fitzpatrick brothers, employed by the construction giant Kiewit as rock scalers on Plutonic Power’s run-of-the-river project at the head of Toba Inlet, had raised safety concerns with their supervisor about their work assignment that morning, pointing out that the day before, heavy equipment working uphill from them had knocked down a boulder that tore through the construction area and damaged a piece of equipment.

“Despite the explicit commitment made the day before by Kiewit management that workers would not be assigned to work downhill from heavy equipment, the Fitzpatrick brothers were ordered back into the same dangerous situation.

“Around 1 p.m., the excavator operator first observed a boulder rolling downhill toward the brothers and radioed a warning. Arlen, who had walked down to the hoe drill (a piece of heavy equipment) below where Sam was working, heard the radioed warning and tried to alert his brother. But Sam didn’t hear the desperate shouts and by the time Arlen ran uphill to where the boulder had struck, his brother was dead.”

“Workers are dying on the job and employers need to be held accountable,” said Hunt. There are far too many examples of workers dying and employers getting off the hook and more needs to be done to protect and save workers’ lives. I am proud of our union’s work to put pressure on corporate bosses and politicians to make necessary changes to prevent workplace deaths and injuries, and we will keep fighting for stronger enforcement of the Westray Law.”

Stop the Killing, Enforce the Law

The Westray Law is named for the May 9, 1992 Westray Mine disaster in Pictou County, Nova Scotia.

On that day, 26 miners were killed when a lethal buildup of methane gas triggered an underground firestorm; some of the buried bodies were never recovered.

The Westray Law, which was unanimously adopted by the House of Commons in 2004, amended the Criminal Code to hold corporations and directors criminally accountable for workplace deaths and injuries. But the law is rarely used, and enforcement is spotty and inconsistent.

“I certainly think the Westray Law changes to the Criminal Code are a good thing,” says O’Donnell. “But I think it will take some time and a lot more prosecutions of big firms and executives for large sums of money and hard time before it makes building and construction safer.”

O’Donnell adds that change will only come when it becomes costly to ignore health and safety rules.

“The law must not simply be promulgated; it must be strenuously enforced.”

USW’s Stop the Killing, Enforce the Law campaign demands the Westray Law be enforced by holding people criminally accountable for the health and safety of workers. Although more than 1,000 workers are killed on the job every year in Canada, the Westray Law has resulted in only a handful of convictions.

“Our union’s ‘Stop the Killing, Enforce the Law’ campaign is making a difference and our message is being heard by companies that if they are negligent in a case of workplace death, they will be criminally investigated and held accountable,” said Hunt. “As long as workers are vulnerable to the negligence of employers, the struggle will continue and we will never give up fighting for workers and their families.”

The Stop the Killing campaign urges legislators in provincial and territorial jurisdictions across Canada to ensure Crown counsels are educated, trained and directed to apply the Westray Law as appropriate; dedicate prosecutors specifically to health and safety fatalities; provide training and education to police forces in the Westray Law; and ensure coordination between police, Crown counsels and health and safety regulators on cases where Westray Law charges may be warranted.

In 2016, the BC Federation of Labour released Justice & Deterrence: A Plan for Criminal Accountability in Workplace Fatalities and Serious Injuries. The paper made similar recommendations that would contribute to better enforcement of the Westray Law. They included dedicated Crown counsels to deal with workplace fatalities and serious injury cases; police training specific to the Westray Law; and mandatory police investigations of workplace fatalities and serious injuries.

Visit stopthekilling.ca to add your voice to the campaign.

On Feb. 22, 2009, Sam Fitzpatrick was killed at Peter Kiewit Sons Toba Montrose project. The day before he was killed there was a serious rock fall incident that had workers running for their lives and causing $65,000 damage to a machine. Sam was killed by a similar rock fall event the next day. Sam was a member of the Christian Labour Association of Canada (CLAC).

Arlen Fitzpatrick, Sam’s brother, witnessed Sam’s horrific death firsthand. Arlen was also a member of CLAC. All the workers that saw Sam crushed to death were CLAC members. So, let’s talk about CLAC and workers in a shortpointed history lesson. I’ll try to compress the story for brevity.

After a long and complex investigation, WorkSafeBC fined Kiewit $250,000 for the incident that cost Sam his life. Kiewit, a US$10-billion-dollar–a–year corporation thought that was too much and appealed.

Sam’s father, Brian Fitzpatrick and I fought back against Kiewit’s appeal and won.

The March 13, 2013 decision from WCAT members, Warren Poole, Andrew Pendray and Sheryl Yeager turned logic and reason upside down and reduced the fine to $75,000, plus a small fee.

On line 58 of the WCAT decision it states, “The union submitted that a presidential penalty was not appropriate given the employers commitment to safety.”

I ask you, what union on earth would seek to help a corporation make a worker’s death more economical? I asked the CLAC head office for clarification on that. No answer.

I asked David Newell at WCAT how the union got to submit that nugget into the decision process. He offered only stonewalling.

Could someone please clarify the actions and intentions of progressive union CLAC regarding the Sam Fitzpatrick case?