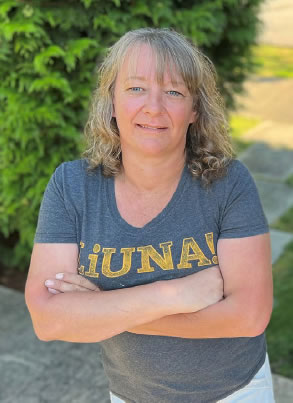 WHEN LISA FLESHER was 18, she wrote an essay about her life for a high school assignment.

She detailed her parents’ breakup, her mom’s descent into drug addiction and sex work, being in and out of foster care with her younger brother and even being homeless at the age of 16. She wrote about her then four-year-old brother being given up for adoption because her mom hadn’t learned sign language to communicate with him. The siblings’ separation was horrific for them both.

It was an honest and articulate essay that made her teacher weep and she was asked to share it with the rest of the class.

Flesher’s essay demonstrated the importance of kindness and compassion for the class because it’s impossible to know what others are going through. It’s a philosophy to which Flesher herself subscribes and it’s made her a strong service representative with LiUNA! 1611. But that wasn’t her initial career path.

After graduating from high school, she wanted to be a youth worker. However, she also needed to support herself and her one-year-old son, so college wasn’t in the cards. Instead, she became a server and eventually managed a pub and beer store in Burnaby.

Lisa enjoyed the job, but the salary wasn’t great and there were no benefits. Every time her son needed a new pair of glasses, Flesher paid cash, which cut into all the other expenses the family faced. At that point she also had a daughter.

“I was a single parent most of my life and I needed to make a decent wage. There was no way I was going to have my kids go through what I went through,” Flesher said.

She joined LiUNA and began working for one of the union’s signatory contractors, earning life-changing wages and benefits. Flesher was accustomed to the precarity of life, so she pored over her collective agreement to make sure that both she and her employer followed all the rules.

“I thought it was important to know my rights and responsibilities and that led to me becoming a job steward,” said Flesher.

Flesher proved herself a capable steward and worker and she was tasked with things like co-ordinating traffic control for the BMO Vancouver Marathon. The thousands of racers, volunteers, spectators and drivers connected to this event will appreciate the necessity of good traffic management.

In 2019, after 10 years on and off as a job steward, Flesher became a service rep for LiUNA! 1611 and it’s a job she truly loves. Flesher’s story is an example of the difference unions can make in a person’s life.

“Being in traffic control is a great introduction into the union and it can also be a career. If you get out there and you want to learn more, we have courses that allow you to further yourself and make changes. We’re always going to give you an opportunity.”

It all starts with opportunity and that’s what LiUNA! 1611 provides.