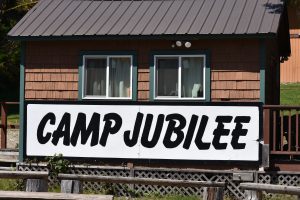 CAMP JUBILEE has been described as one of labour’s best kept secrets.

The camp was founded in 1936 by the Workers’ Unity League, as a place where all children – not just those who could afford it – could go to summer camp.

The Women’s Auxiliary was essential in keeping the camp running, along with volunteer labour from unions, service clubs and community groups.

“Our main objective is to send kids to camp,” said Dave Duckworth, general manager of Camp Jubilee. The camp, which originally had 300 students, now hosts roughly 6,000 to 8,000 students annually.

“One of the unique things about Jubilee is that it’s so close to the Lower Mainland,” said Duckworth. “But because it’s water access only, it feels so far away.” The camp sits on 128 acres at the foot of Mount Seymour, but it’s only a half-hour boat ride from North Vancouver. “The kids really do feel like they’re in a beautiful piece of West Coast wilderness,” he said.

“A lot of our kids who come to camp aspire to become camp leaders,” he said. Indeed, around 60 per cent of the children will eventually go through the camp’s leadership programs. In the 1980s when the camp had become run-down and had to close, the members of the BC Building Trades helped bring it back to life.

As noted in We Build BC: History of the BC Building Trades by Jim Sinclair:

“Affiliates and members … found ways to contribute, either by giving money, donating equipment and materials, or just as importantly spending weekends and vacations hauling equipment, pounding nails, and making sure the project did not stall.”

Revitalizing the camp was no small order since building materials and equipment had to be barged up Burrard Inlet, but the result was a “safe and beautiful summer camp for kids.”

“If a family can afford to pay the full fees, they will,” said Duckworth, “And if they can’t afford to pay, we get sponsorships from organizations such as unions, or service clubs.”

The Labourers International Union of North America (LiUNA) Local 1611, is one of BCBT’s affiliates donating directly to the camp and to schools.

“Most schools do not have the opportunity or luxury to send all of their students to camp,” said Nav Malhotra, 1611’s business manager. “Our commitment is to send as many students as we can,” he said. “It’s important to give back to the community.” Malhotra said the camp is especially important for new immigrant families and their children. “It helps to build connections between students and it builds their self confidence,” he said.

The camp now provides a range of programs beyond its original mandate, including a space for union education and retreats. The BCFed Young Workers School is held regularly at Camp Jubilee to help young workers from all sectors gain leadership skills. Arjun Dhillon, an apprentice with IBEW Local 213, said the school was an awesome experience. “We gained knowledge we can take forward for the rest of our lives, and pass on to others,” he said.

Camp Jubilee had to close some of its core programs due to the pandemic. “There’s been a lot of support from parents and from the unions and with some federal COVID supports, we’ll be ready to reopen our kids’ programs in August (after Tradetalk’s press deadline),” said Duckworth.