When B.C. Premier John Horgan gave his final speech at the BC Building Trades 50th annual convention in October, it was clear that this was a man with high regard for the province’s unionized construction workers. The warmth and camaraderie were palpable as Horgan covered the highlights of his relationship with the building and construction trades and as he discussed the reasons for leaving his job as premier.

Horgan said that he was stepping away from the job with mixed feelings. “I’ve loved every minute of this job. I’ve loved being able to represent you. I love being able to drop down on your workplaces and come into your communities and to just talk about whatever you’ve got on your minds. It is the greatest privilege of my life to be able to do that,” he said. “When I step away, I know the province is going to be in good hands because it’s going to be in your hands.” Horgan was rendered speechless at one point. His presentation was met with heartfelt applause and more than one standing ovation.

The premier said he was proud of his relationship with the Building Trades and, although it hasn’t been without difficulties, it has resulted in some extraordinary accomplishments.

“He was someone who had the interests of construction workers at the forefront of his mind,” said Brynn Bourke, BCBT executive director. “He was able to keep that focus throughout his entire premiership.” 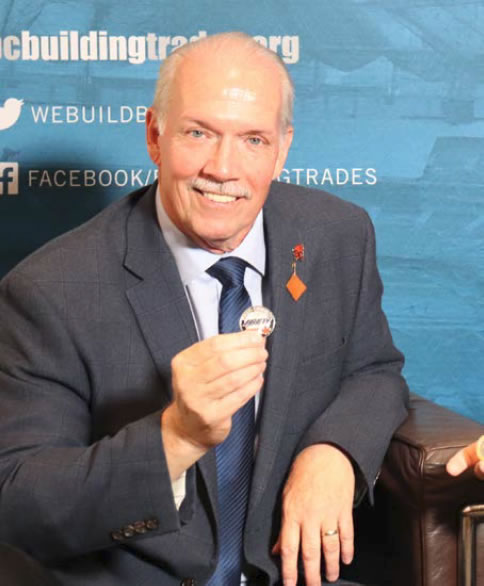 Horgan showed his friendship and commitment to construction workers by carrying a building trade union challenge coin with him. The coins, which have their roots in the military, are now widely used to indicate affiliation with an organization and many of B.C.’s trades use them.

The coin became almost legendary for Horgan who managed to have some version of a challenge coin with him whenever he travelled to events throughout the province.

It was the business manager of the International Brotherhood of Electrical Workers’s Local 993, Glen Hilton, who gave Horgan his first challenge coin. Hilton reported that it was during a Forward 2016 conference in Kamloops, before the NDP formed government, and Horgan and his team were meeting with the IBEW to discuss some projects. “We had our challenge coins that were just freshly minted and I presented one to him, and he kind of liked that,” said Hilton. “He kept it on him and as things went along, whenever he had it on him, good things happened, so he took it as a lucky coin.”

Hilton said the first time he ever saw challenge coins being used in the building trades was at an IBEW event in Alberta over a decade ago. “They are a token of friendship and camaraderie,” said Hilton. “And just like a regular friendship, there is some give and take involved. You also are obliged if you take it, to keep it with you.” It seems that Horgan took that challenge seriously and Hilton said he never saw him without the coin after that.

There’s a running joke about Horgan having to carry a pocketful of coins from the various trades to ensure he would have the right one if challenged. “He’s challenged us all many a times and lost,” said Hilton, with a chuckle, adding that Horgan could spend his entire retirement paying back what he now owes.

Although it’s unclear exactly which version is Horgan’s lucky coin, what is clear is that the connection to the Building Trades mattered very much to him and he drew support from it.

“To me, it isn’t just a coin,” said Bourke, “It’s a symbol of workers.” Bourke said the fact that Horgan carried this symbol with him and used it to ground himself through both political, and his more recent health challenges, spoke to the kind of leader he was. “It says a lot about his heart and what motivates him. And when he needs courage, what does he draw from? He draws from the power of working people and what he owes to them.”

Bourke said Horgan has been a passionate advocate on issues facing the Building Trades. “It was John Horgan who wanted to build the big construction projects in this province with Building Trades union labour, with apprentices, with local hiring provisions and to support under-represented groups,” she said. “He was responsible for getting us into government work again. He was a big driving force with the new changes around asbestos contractor licensing.”

Brian Cochrane, business manager for International Union of Operating Engineers Local 115, said it was Horgan’s leadership that helped bring balance back to the Building Trades in British Columbia, including changes to the labour code and being an advocate for workers’ rights to organize.

“The Liberals devastated the labour code back in 2001 so we had a long period of time with a government that was putting trade unions out of business, especially Building Trades unions,” said Cochrane. “Horgan understood the importance of the advocacy work trade unions have done over the years, whether it was health and safety, work on pensions, training or trying to protect B.C. jobs. And he tried to engage organizations to support B.C. tradespeople.”

Horgan went to great lengths to help pull the Building Trades out of that 16-year hole.

“John really did a double whammy with the appreciation he had for the skills Building Trades bring to the table, and engaging us in project labour agreements, engaging us in the community benefit agreements, creating a whole new model for public construction,” Cochrane said. “And putting significant projects under those models speaks volumes to the respect that he has for the workers in B.C. and their rights to organize, and their rights to advance themselves, and all the things that are important to any trade unionist in the province.”

While the BC Building Trades affiliates will be looking to continue building a strong relationship with new Premier David Eby, the foundational bond they’ve built with John Horgan has set the table for success and will most certainly never be forgotten.