Christopher Henry was planning to end his life.

“I was going to commit suicide,” said Henry* matter-of-factly.

A journeyperson reinforcing ironworker with some 30 years’ experience, Henry had arrived at what felt like the lowest point in his life. Three years earlier, in October 2016, he was seriously injured in a workplace accident at the John Hart generating station. Henry was working alongside an apprentice building a ramp when the apprentice, whose job was holding back a thick piece of rebar, unintentionally let go of the rod. Effectively spring-loaded, the rod slammed into Henry’s forehead and knocked him off his feet.

Shaken, Henry got up and continued to work for another 90 minutes before his foreman instructed him to visit the site first aid tent. There, the two registered nurses staffing the tent ran some tests and told Henry to report to a medical clinic in nearby Campbell River right away. His supervisor drove Henry to the clinic, where a doctor diagnosed him with a concussion. He was instructed to take a couple of days off work and get as much sleep as possible. (Both Henry and his employer filed a claim with the Workers’ Compensation Board (WCB) as required by law, and it was accepted soon afterward.)

The next day, the supervisor for the company Henry was working for stopped by and invited him to attend a special luncheon at the John Hart work site; the general contractor was celebrating a safety milestone and there would be speeches and a luncheon for the workers. Henry agreed, but realized what a grave mistake it was soon after arriving.

“The rain poured down on the tent and it was so loud,” Henry recalls “I couldn’t understand what people were saying, and I started to panic. I ran out – I just had to get out of there.”

At that point, Henry and the on-site first aid staff suspected his injury was much more substantial than a concussion. He was taken to North Island Hospital for a CT scan, and that’s when doctors told him he had a traumatic brain injury. For Henry, it was the start of a three-year ordeal fraught with fear, depression, uncertainty and sometimes, anger.

One step forward, two steps back

“I wasn’t always the way I am now,” said Henry.

Before the accident, Henry was frequently name-requested by company owners, all of them attracted by his experience, strong work ethic, and reputation for fabricating new tools and introducing innovative construction techniques.

He was on track to comfortably retire at 62 with a full pension and enough cash to completely renovate his home on mid-Vancouver Island.

He ran two successful businesses, including a pressure-washing company contracted to clean the United States Pavilion at Expo ’86 in Vancouver. His pressure washer was so noisy that then BCTV personality Jack Webster, who was filming on site, asked him to stop because it was interfering with the audio. Henry agreed, but only if he got two minutes of free airtime for his business. Webster agreed, and that’s how Henry’s company came to be endorsed by Vancouver’s “king of the airwaves.”

He survived a colon cancer scare.

Henry listed all these things in a detailed letter to his vocational rehabilitation consultant at the Workers’ Compensation Board. He wanted her to understand the difference between who he was and who he could no longer be.

“I wasn’t just a claim number. I was an honest, contributing member of society who paid his taxes. I didn’t want to get hurt – I wanted to work.”

In the days immediately after the accident, Henry declined quickly. He developed a severe startle response that made even a sharp knock at his front door completely debilitating. He experienced massive headaches, extreme anxiety, and dizzy spells. He lost the ability to speak.

Throughout his WCB claim, Henry met with two kinesiologists, a sports pathologist, a psychologist, a speech-language pathologist, occupational and physical therapists, and numerous counsellors. He was put through an intensive rehabilitation program in Vancouver. Eventually, he was placed on a gradual return to work plan, with disastrous results. It was the first of three return-to-work placements.

Three strikes with return to work

Return-to-work programs are supposed to contribute to a more rapid and complete recovery. In Henry’s case, it laid bare the devastating truth that he would never again work in the trade he loved.

Henry was sent out three times to different job sites, and three times he was overcome by headaches, anxiety and terror. Sometimes, the commute alone was crippling for Henry. He remembers driving down Highway 1 on his way to Chilliwack. It was raining and Henry was driving the speed limit in the centre lane, trying to avoid both the faster cars in the left lane, and the cars that were just entering the highway and merging into the right lane. At some point, he became boxed in by a semi-trailer on both sides, and a pile of debris in his path ahead.

“I fell apart right on the highway. I became completely undone. I got to the job site shaking and stuttering. I was literally coming apart.”

Nevertheless, Henry put in his time and worked a partial day. But his performance was so poor that before the end of his shift, the foreperson told him to go home. At another jobsite, another foreperson advised, “I don’t want him back.” It was the first time in Henry’s long and distinguished career that he’d been told such a thing. 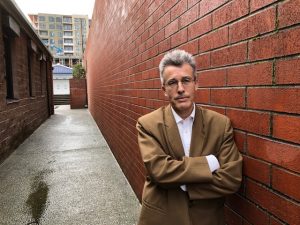 On the final day of his third work placement, the company’s sympathetic regional manager took him aside before leaving the jobsite and apologized for not seeing him sooner. The manager was one of only a few people on the job who knew what had happened to him.

“The last thing he said to me was, ‘Tell your story.’ And you know, I never understood what he meant until I started talking to Merrill.”

Henry was referring to Merrill O’Donnell, the BC Building Trades’ tenacious workers’ advocate, who represents members who need assistance with their injury claims.

He had gone through three return-to-work placements and was unable to function effectively in any of them. Despite his struggles, a WCB case manager officially terminated his wage loss benefits in February. Henry wondered whether he would lose his house and what sort of future he might have being unable to work.

He was consumed by anxiety and some nights he couldn’t even sleep in his own bedroom, opting instead for the smaller guest room in his home because it felt more like a cocoon where he could shut out the rest of the world.

But even in the guest room, Henry experienced horrific nightmares. These were so intense that he chewed through the dental guard he normally wore to prevent grinding his teeth. He ended up cracking two back molars and damaging fillings; he subsequently lost both teeth.

“I thought about killing myself many times,” he admits.

At that point, Henry contacted Ironworkers Local 97 and explained to business manager Doug Parton everything that had happened. Parton couldn’t believe it.

“We’ve worked together, so I know him well,” said Parton. “He would work if he could – he obviously couldn’t. You know, my heart went out to him and we were prepared to do everything in our power to ensure he was treated fairly.”

Parton contacted O’Donnell, briefly explained Henry’s issues, and asked for his help. Immediately, O’Donnell contacted Henry and after speaking with him for almost two hours, he sought disclosure of the WCB claim. As soon as the disclosure was approved, a few days later, O’Donnell set to reviewing key documents and found the disturbing revelation that Henry was suicidal. Leveraging this evidence, O’Donnell pressed the case manager to reopen the claim immediately. Five days later, the claim was officially reopened, wage loss benefits were reinstated, and the arduous process of revisiting Henry’s claim began.

“Once the adjudication of the claim was reignited, WCB undertook further medical analysis and then made several pivotal decisions,” said O’Donnell.

By spring 2018, WCB had accepted that some of Henry’s symptoms were permanent. For his psychological impairment, Henry was granted 25 per cent of total disability by WCB’s Disability Awards Department. This translated to 25 per cent of 90 per cent of his annual net income, paid out monthly. At this point, Henry’s file was also conveyed to vocational rehabilitation in an attempt to return him to work, other than his pre-injury work.

Along the way, there were additional bumps in the road. For example, Henry’s claim had four different vocational rehabilitation consultants, for various reasons. His second vocational rehabilitation consultant, with whom he had an excellent rapport, went on leave and was expected to return, necessitating a waiting period. Ultimately, however, the consultant did not return, and Henry was assigned a new representative. From Henry and O’Donnell’s perspective, this new representative was inappropriate, which led O’Donnell to meet with the vice-president of claims to request a new consultant for Henry.

“He was extremely fragile as a result of the accident,” explained O’Donnell. “The claims process needed to respect and accommodate that.”

Fortunately, the VP was sympathetic and agreed to assign a new consultant to Henry’s claim.

“Oftentimes WCB does the right thing,” O’Donnell said. “This was one of those times. The VP’s thoughtful decision resulted in Henry getting an outstanding vocational consultant who meticulously reviewed the evidence and moved things forward.”

Other things started to turn around, too.

O’Donnell successfully appealed the initial 25 per cent psychological award and had it increased to 40 per cent by the Review Division. At the same time, he kept pushing for a 100 per cent loss of earnings award — an award that is only granted to injured workers who are deemed “completely unemployable” by WCB.

On Nov. 27, 2019, more than three years after the original workplace accident and after almost two years of pushing WCB to make the right decisions on a wide range of issues, O’Donnell and Henry got the result they were looking for: a 100 per cent loss of earnings award, retroactive to May 2018 and paid until Henry turns 65 years of age. That means Henry will  receive 90 per cent of his net earnings until he is eligible for his federal pensions.

“It was our position from the get-go that he was completely unemployable – no ifs, ands, or buts about it,” said O’Donnell. “This disability award is validation of that.”

O’Donnell has represented hundreds of injured construction workers during his eight-and-a-half years as the workers’ advocate for the BC Building Trades. He has achieved a 100 per cent loss of earnings award on four or five occasions – something that isn’t lost on Henry.

“He’s my champion,” Henry says of O’Donnell. “He made me promise I wouldn’t take my life. He gave me his home number and he said he’d never lost anyone on his watch, and he wasn’t about to start now.”

For O’Donnell, as difficult and emotionally draining as his work is, the rewards far outweigh the challenges. Henry’s case is but one example.

“I try to represent every member to the best of my ability. It was Tom Sigurdson, our former executive director who will officially retire in March 2020, who had the vision to propose the creation of the workers’ advocate office to our executive board. Thanks to him, hundreds of our members have been represented when they got snarled up in the grinding grizzly bear jaws of the WCB system. And thanks to him, our future injured workers will get the support they need and deserve. As for me, I simply have the best job in the world. I fight for the underdog.”