Women in the driver’s seat

THE FIRST EVER ALL-FEMALE COHORT has completed the Heavy Equipment Operator training program, a partnership between the YWCA, and the International Union of Operating Engineers, Local 115.

“With the booming construction industry in B.C. we’re looking for opportunities for people who don’t traditionally work in the field,” said Jeff Gorham, training administrator for the Operating Engineers Local 115 Training Association. 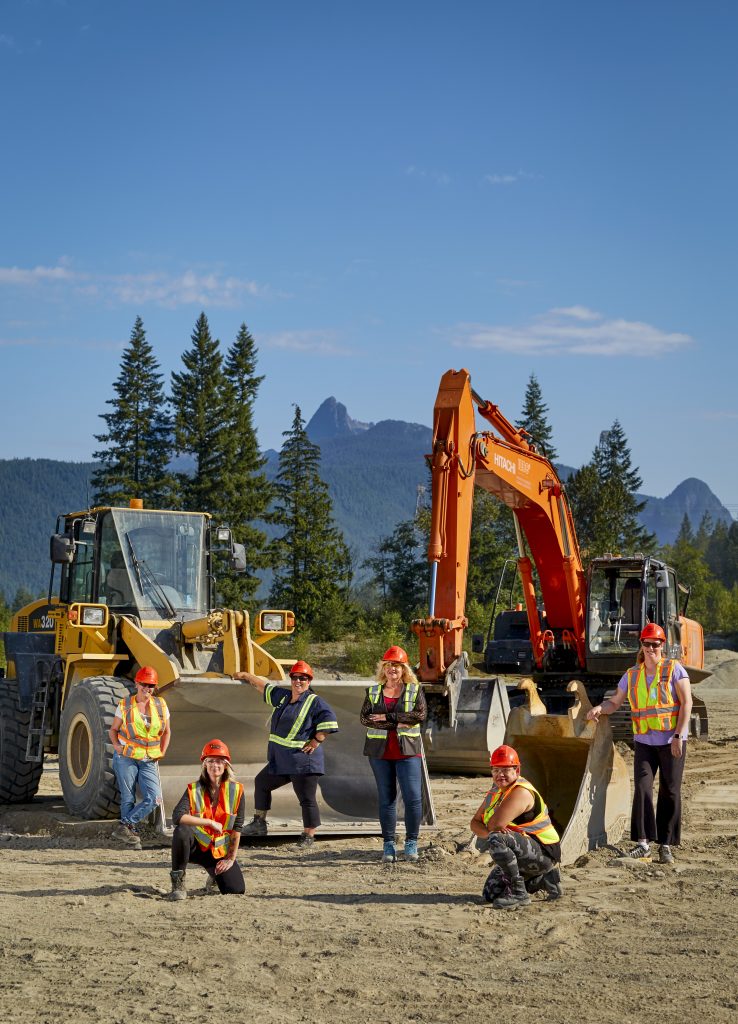 Gorham said the project ties in well with the government’s mandate both with LNG Canada and the provincial NDP government’s Community Benefits Agreement, which prioritizes jobs for equity-seeking groups, including women in the trades, apprentices and Indigenous workers.

“With the LNG projects and the Pattullo Bridge just starting, we were able to provide opportunities for women in the trades,” he said. “Timing wise, it’s perfect.”

There used to be very few women, if any, in the heavy equipment classes, said Gorham. But now, it’s rare to have a class without a female student.

“We provided as many supports as we could to ensure success,” he said. Even before the women started the course, they spent three weeks learning essential skills, and the training was followed up by job preparation courses before the apprentices were placed in their practicums.

Karla Cisneros, one of the six apprentices, described the experience as a “never-ending learning adventure.”

Cisneros said the best part of the experience was learning to operate each of the machines.

“My favourite machine was the excavator. It took my mind away from everything, any problems out there, and I just concentrated on my digging and what I was doing.”

She spoke highly of the instructors and the course overall.

“The instructors were always there 100 percent,” she said. “When you get older, you think you know how to do everything already. But this isn’t true. They had to work with us and show us how things were done. They were very patient.

This was made easier with the help of a computer provided by WorkSafeBC, she said. “Even though they say there’s never a dumb question, I didn’t want to be asking something like ‘what is a sprocket?!’”

She added that “the union helped out with everything.”

Apprentice Brenda Dvorak worked for many years in office jobs in the gravel industry before taking the program. Dvorak said there are not many women working on heavy equipment in that industry.

For Dvorak, the best part about being a heavy equipment operator is the variety.

“It’s going to be different than sitting at a desk in front of a computer,” she said. “No two jobs will be the same. One day you might be straightening a road, the next day you might be digging a basement.” And since the work is outside, there’s changing weather, too, she said.

Dvorak, who said she’d never liked school, carried a 90 per cent average in the course. Her work has caught the interest of her sons, who would be eligible to do the training through her union membership.

“I’m absolutely amazed that it’s opening these kinds of opportunities,” she said.

The course, however, wasn’t all smooth sailing for Dvorak. “Getting over myself and being scared. Realizing that I can do this and it’s not just a man’s job. I have a lot of male friends and family dealing with heavy equipment. They helped push me because they know that I can do it.

“It’s something I really wanted. I know in the end it’s going to benefit me and my family, monetary wise,” she said. ”I’m excited to get going.”

Unlike most of the apprentices, Desiree Aukema had experience operating heavy equipment before going into the course. Even so, she says, “It’s been hard to get jobs and to be taken seriously in the industry.”

What does Aukema like best about being a heavy equipment operator? “I feel like I was born to do this,” she said. “I loved all of it. I don’t feel like I’m at work.”

Aukema said there was a lot more information in the course than she expected. “The instructors were amazing. They were patient with us. They wanted us to succeed.”

“I encourage more women to do what they really want to be doing,” she said. “Don’t let the thought that it’s a man’s job stop you from doing what you want to do.”

“All six women who completed the training now have work placements, with three in the local area and another three with LNG in the North,” he said. “It’s a real success story having a program like that and putting our people out to work.”