What the new Community Benefits Agreement means for tradespeople in B.C.

Community Benefits Agreements (CBAs) are growing in popularity in British Columbia, and for good reason. 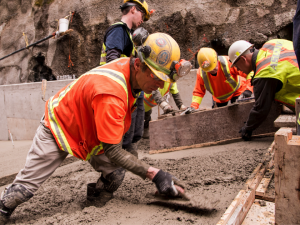 CBAs have been used throughout North America for more than 20 years, and their recent introduction into B.C. infrastructure makes them an important topic for the province’s tradespeople and residents.

The provincial government introduced CBAs on public infrastructure projects in July 2018, while Vancouver became the first major city in Canada to implement a city-wide CBA policy shortly thereafter, in August.

Under the Vancouver policy, developers of future large-scale projects will be required to guarantee a minimum of 10 per cent of entry-level jobs to Vancouverites. Developers will also have to purchase a minimum 10 per cent of goods and supplies from Vancouver-based businesses.

Provincially, CBAs gained popularity in July 2018, when Premier John Horgan announced that the province’s first CBA would be applied to the Pattullo Bridge replacement between Surrey and New Westminster.

Under the provincial framework, hiring provisions ensure opportunities for Indigenous workers, local residents, apprentices and women in trades. Workers receive union wages and benefits for the duration of the project and also have access to additional safety and training programs.

All workers on a project are also expected to be provided with sustainable, comprehensive Indigenous cultural competency training.

British Columbia is already facing a major skills shortage, and it’s estimated that by 2026, the province will have a further shortage of 8,000 skilled construction trades workers. Training on public projects must be incorporated into the work to ensure the supply of a highly skilled workforce, which is needed to build not only the infrastructure of the province, but the provincial economy as well.

Support for these agreements is also continuing to grow across the province. A BC Building Trades Council survey in August 2018 showed that 70 per cent of B.C. residents support building publicly funded CBA projects.

The largest percentage of support comes from southern B.C. residents (86 per cent), where the Pattullo Bridge replacement and the widening of the Trans-Canada Highway from Kamloops to the Alberta border were announced. The study also shows that support for CBAs is high among women and residents ages 18 to 34 (75 per cent).

These types of equitable hiring agreements further benefit residents who aren’t directly involved in the trades. They help ensure there are no work stoppages, like strikes or lockouts, for the duration of construction — meaning that public projects are more likely to begin and end on time. Investing in worker safety and training, another important facet of CBAs, is also crucial to projects finishing in a timely manner.

CBAs have been used throughout North America for more than 20 years, and their recent introduction into B.C. infrastructure makes them an important topic for the province’s residents.

To learn more about CBAs and their impact on B.C. workers, visit letsbuildbc.ca.