Labour lawyer, activist to take reins of BC Building Trades 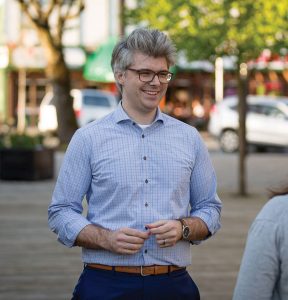 Labour lawyer Andrew Mercier will take the reins of the B.C. Building Trades Council as executive director next month.

Mercier will replace Tom Sigurdson, who joined the council in 2010 after a lengthy career in political and legislative affairs. Sigurdson will remain with the council as an advisor until March 2020.

“With his past political experience and advocacy, and his stellar work as legal counsel for Teamsters Local 213, Andrew is well-positioned to lead B.C.’s unionized construction sector into the next decade,” said BCBT president Phil Venoit. “We’re thrilled to have him in this role.”

Mercier graduated from Dalhousie University’s Schulich School of Law in 2017, joining the Teamsters as legal counsel that same year, where he was responsible for grievance arbitration, judicial reviews and labour relations. He won a significant arbitration earlier this year against a company that tried to contract out certain work, in violation of the collective agreement.

Fighting on behalf of working people came naturally for Mercier, having watched his mom, a nurse, spend years battling the Workers’ Compensation system after enduring multiple back and knee injuries at work.

“She suffered a lot,” recalls Mercier of his mom’s pain. “When you watch someone close to you experience the bureaucratic and regulatory structures that are supposed to serve working people, you soon realize that those systems can in fact disempower or even hurt people, too.”

With his mom working as a nurse and his dad a police officer, Mercier grew up with the belief that if you observed an injustice, you should try to fix it. Thus no one was surprised when a 25-year-old Mercier got involved with Adrian Dix’s campaign for the leadership of the BC NDP. He was also active with the federal party, managing Piotr Majkowski’s Langley campaign in 2011. Majkowski garnered 11,235 votes, which marked the best showing for the party ever in that riding.

Then in 2013, Mercier went from supporter and manager to candidate when, at 27, he became the youngest New Democrat to run for a seat in the provincial election.

By 2018, Mercier had expanded his political experience to include a run for Langley City Council on a platform of affordable housing and transportation. The first-time council candidate finished 128 votes shy of election.

Fast-forward to 2019, and Mercier is ready for another challenge, this time to advance the interests of B.C.’s 35,000 unionized construction workers. He sees bringing back compulsory trades, launching an independent Labour Code review for the construction sector and securing additional projects under the province’s Community Benefits Agreement framework as priorities.

“A healthy, robust construction sector is important to our provincial economy as well as to the thousands of men and women who work so hard building our roads, our bridges, and our buildings,” said Mercier. “We have a huge role to play ensuring that these workers who build our province are well-trained, well-paid, well-represented, and able to go home at the end of every day to their families.”