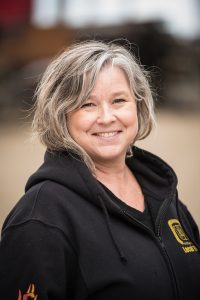 Julie Sawatsky, a member of the B.C. Regional Council of Carpenters, is one of five new apprenticeship advisors hired by the Industry Training Authority (ITA) this fall.

“I see the job as a real support for workers, being a voice for workers,” she said. Sawatsky will be assisting apprentices and employer sponsors navigate the apprenticeship system.

She brings 25 years of experience as a Red Seal carpenter, along with many years of service promoting the skilled trades, especially to people under-represented in the trades. She also chairs a program for women in the trades. She has worked as a career counsellor and adult educator in her fields of expertise and with youth at risk.

As apprenticeship advisors, she said, “We help to support over a hundred trades, from hair styling to cooks, to automotive and construction…There’s a concept that trades are something you do because you can’t do anything else,” she said. “The trades are a huge industry. They pay well. They are for skilled, smart people and a way to open doors.”

She calls it, “the ‘other’ four-year degree.”

The need to increase the number of advocates in the system was identified in the McDonald report (part of B.C.’s Blueprint for Jobs issued by the B.C. Government in 2013/14). The 29 recommendations from the report–the result of public consultation–resulted in 15 regional apprenticeship advisors being placed on the ground at that time. In part, this need was driven by the forecasting of job growth due to new infrastructure projects.

“Number one is building those relationships.”

Advisors provide resources to industry and information about industry changes, such as the harmonization of training requirements for Red Seal trades across Canada. The overall goal of the advisors is to improve the number of completed apprenticeships in the system.

The new advisors will also help to address regional disparities that have existed across the province. “There was lots of need in rural and remote communities and some of the Indigenous nations are in areas that just weren’t being serviced,” said Sawatsky.

There is also a focus on diversity and inclusion within apprenticeships. “So having more Indigenous participants, more women in the trades. We’re really supporting and sustaining those apprentices as well as the other 37,000 apprentices that we already have in our system.

“The recent appointments mean there will be more one-on-one support for people who might be having difficulty with the process and maybe not completing (their apprenticeships),” she said, “making sure that students are getting their hours logged, helping them to rewrite their exams or helping them to understand their role in the process and ask the right questions to employers.

“We’re coming back to a really good system where there’s more access to individuals for help.”